The chains dragged his feeble flesh to the floor, their unseen lengths fading into the dark nothingness from which they’d sprung. Yet he struggled under the weight, and the chains jingled faintly. In the infinite blackness of his prison were no echoes heard, not even an echo to sympathize with his groaning, no echoes in that pit. All alone he lay a crumpled ball. As the years passed, the chains quieted, and the moans gave way to the silence of despair.

But some animal urge is still there, and after a time he raises his head, mad and delirious. His teeth gnashing, he howls. The sound of all his brokenness is heard in that scream. The silence tries to stop it, but some small sound returns to the man; his cry, not rebounding off any wall, had reached heaven, and now returns to him.

The small echo breaks through the sky, shattering the night. Above the man his prison breaks, and all the light of life rushes into his world, the black dome over him cracking like ice. Voices, long dead, shout in ecstasy, in terror, garbled static. Into the light the bound spirits flee. 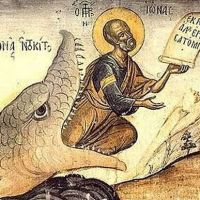 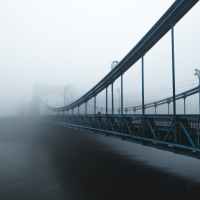