I have found people praising certain literary ideas which, to my mind, fail, and not to call out any one ideology, but these ideas are often feminist. They are praised as being good ideas for writing; they are not. One recent example, which started off well, followed something along the lines of a young woman being a good fighter and the explanation for her expertise being that she had three older brothers. The trope is then subverted when, instead of hearing about how her brothers fought or beat or taught her, the reader learns that the speaker’s older brothers were not physically impressive and needed her protection.

Analyzing this particular concept, I find aspects appealing. She isn’t fighting for herself; she is protective. This reminds me very much of a friend, C­­­­–––n, who was protective and defended me at times. However, C­­­­–––n was not one to raise her hand, instead raising her voice, to defend those she loved. This slight difference aside, the generalized concept that a good fighter became so to defend others is, I think, an okay idea for a story or character. It seems, actually, to harmonize with reality. And that is the part I wish to get at, harmonizing with reality.

The part I disliked about this idea, or the part I think was bad, was added to the ending, where a highlighted comment proclaimed something along the lines of this idea being good because the character didn’t need no man.  This observation seems to have two flaws: It is not a true statement, or in other words, it does not harmonize with reality, and on top of this, the idea seems to be antagonistic towards reality.

It is not true. On the level of the story, there is no statement regarding how the character learned to fight, only the why. A man could have taught her to fight, a woman could have taught her to fight, or she could have just picked it up naturally. Any of these options are possible as the story is presented, but why should it be virtuous that it was not a masculine figure which taught the character how to fight? Or, as it is presented in the comment, why should it be a bad thing to have a male teaching a female how to fight?

The argument within the comment seems to stress the overabundance of men teaching women to fight, that is, that it has become a cliché. Here, I think, is where the idea becomes antagonistic to reality. The sky is blue. This is not a cliché but a truth. It is also true that the sky can be black or grey or white—I once saw the sky turn purple—but the sky is blue.

Just as the sky is blue is not cliché, it is not cliché that men teach their children, generally their sons, to fight. I have known women of physical courage. When I took TKD classes as a kid, the sparring lessons were often taught by a woman. (She would kick me in the head. It hurt.) It never subtracted from her position that men, predominantly men, taught our general classes. Taking BJJ classes, I have learned from women better skilled than I. They have also learned from men, from women, and from themselves.

Fiction is not divorced from reality, nor are these in contention. Good fiction needs to express reality. Sometimes, this means saying the sky is blue, sometimes it means saying the sky is black—but it should never need the sky to not be blue, nor praise nonblue skies for not being blue. At such a point, the ideology is running the art, not reality, not truth. At such a point, when you can see a blue sky but make it virtuous to say that it is not blue, making a lie a virtue, then Satan himself has a foothold in the work. 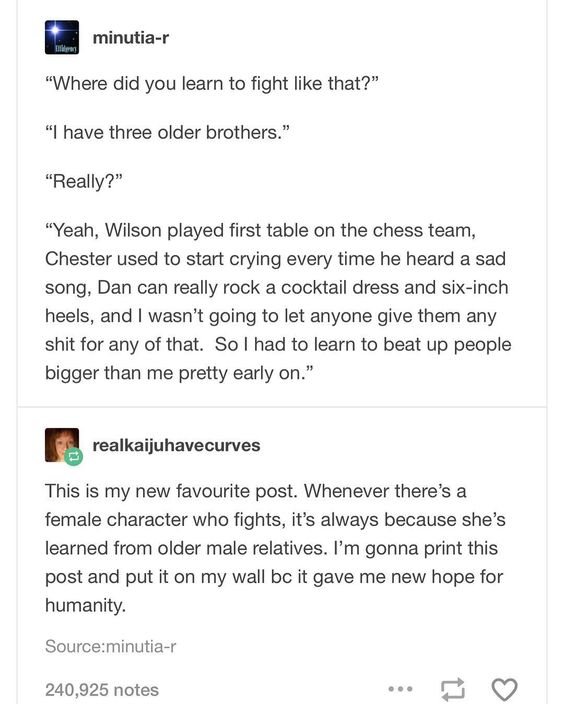